Fiji Adventures: Ashley with Her Beaus

The “Fantasy Suite” dates started with Ben. Ashley was so excited to see Ben, and they have such a fun loving relationship. I found that Ashley and Ben were very flirtatious this episode, which gave us viewers the opportunity to see passion, between these two. The statements Ashley says about Ben, are contradicting to the rumors. She has said that she feels like Ben is her boyfriend, but the most telling comment was when she said, “I feel like we are on our honeymoon.” That was a major moment.
I loved Ben’s face, when Ashley gave him the opportunity to put sunscreen on her. After that moment, Ashley and Ben had another aspect to their relationship. Throughout the process, Ashley and Ben’s connection could not correlate to J.P. This date alternated that preconceived notion strikingly. Ben has exhibited the many depths of his personality very well. He is sweet, but has so much compassion. Ben has such a zest for life, and has grown immensely throughout this process. If he is not the next Bachelor, America will be baffled.
J.P. and Ashley are incredibly close. In a contrasting way to, Ben and Ashley’s closeness. J.P. and Ashley have a similar relationship to Ali and Roberto’s. They have passion, but are playful with each other. J.P. has lifted Ashley up, from her lowest point, after Bentley. He had two dates following Bentley, but made Ashley forget about her worries. She has even exclaimed, that J.P. is “Her Rock.”
I felt bad for J.P. when Ashley said that two guys went home this week. J.P. thought he was the final one. Then when Ashley told him someone came back, his face was priceless. I guarantee he thought Bentley came back again, and then when he heard Ryan, I thought he was going to laugh hysterically. She has confided in J.P. and been completely honest with him, not matter what.
I completely agree with Ashley continuing with the rose ceremony. It was necessary for her to find out, if the guys wanted to be with her. Throughout the season, I had no doubts about these two guys. They were destined to be the final two from the beginning. If Ben or J.P. would have left, that would have been the most shocking moment in Bachelorette history. Were you wondering what Ben was thinking, on why Constantine was not there? I sure was, he had quite the look on his face.
When this season is over, I will miss Ashley and J.P. ‘s dates. Seeing them together, shows how much they are in love. As much as it saddens me, as such a Ben fan, but I honestly think J.P. has it won. The difference always comes down to who you can live with, and you cannot live without. Ashley could live with Ben, but she cannot live without J.P.
I originally wanted Ben and Constantine to both be the Bachelor, but clearly Constantine is too finicky. I am team Ben for the new Bachelor. Please go to the polls, and vote for whoever you think would be the best. What do you think? J.P. or Ben? Cannot wait for next week! 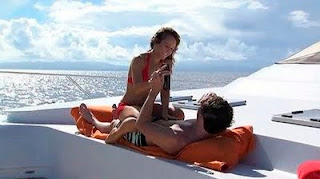 Anyone have this image stuck in their brain?
Photo rights belong to ABC.
Love,
Bachelor Expert
Posted by Bachelor Expert Ash at 9:53 AM