The Bachelor Pad began with the reflection period. Chris Harrison made an appearance at the end of the rose ceremony, advising the contestants to choose a partner, and learn about them. At this point, the drama only became worse. Erica asked Michael if he and Holly were partners. Michael replied with yes, without consulting Holly. Blake and Holly had sullen faces, because obviously they wanted to be partners.
After this, Erica saw that she did not have options, and became partners with Blake. While the couples were getting to know each other, Vienna and Kasey went to sleep, because they know everything about each other.
The contestants woke up to a challenge. ABC was clever calling it the "Nearlywed Game." Michael said, "That was us." As if he needed a reminder of his failed relationship with Holly. To the audience's dismay, this was not the end of Michael's heartbreak. The questions started out typical for the game, and exceedingly became worse. 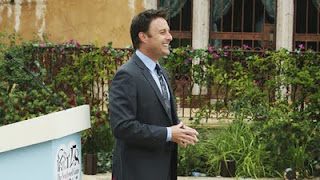 I feel bad for Michael, but he is appearing delusional, because obviously Holly and Blake have a connection. There would be a point where I would think, I am not going to get this person back, so I might as well try to win the money. He is an outstanding guy though, and I hope he finds love. 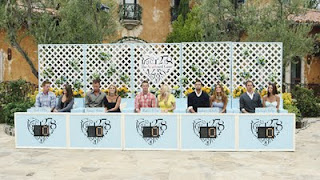 Top Ten Moments of the Challenge:
1. Michelle and Graham's strategy was brilliant! I am so happy for them, and they are clearly smart enough to win this show.
2. Kasey saying that Vienna's ex's miss her teeth.
3. Kasey and Vienna answering the majority of the questions wrong.
4. Ella and Kirk acquiring a plethora of information about each other, after only a few nights.
5. The cast conveying their animosity towards Blake.
6. Erica answering Blake would be a flying squirrel correctly.
7. The anger between Kasey and Vienna during the challenge.
8. Michael choosing himself when it came to Holly's answers, and then being in shock. Ouch! Beyond awkward moment.
9. Vienna saying Erica was the most annoying, and Erica confirming that it was mutual.
10. Erica's crush being Ella, but not understanding the question. 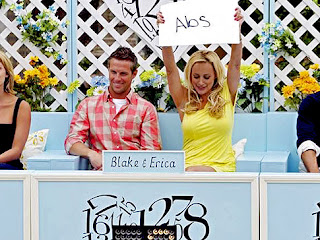 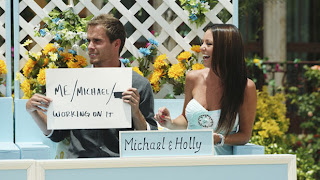 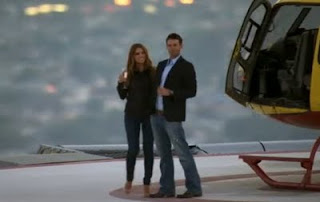 Of course ABC put them in swimsuits in a pool, because they are too gorgeous to be fully clothed together. Their date was magical, and I loved the sweet things Graham said about Michelle. Which totally made up for the pitfalls of their last date. I could watch these two be together forever.
Up next was the Blake and Erica date. Holly walked through the kitchen in a bikini, because she wanted "to swim." Come now if that was not the biggest coincidence ever! Erica spoke with Michael before the date, in hopes to convince him that Blake was not the problem. I completely agree, Blake is not the problem when it comes to Michael and Holly. Blake is a shady person, and has caused a lot of drama in the house, but he is not the problem there. With or without Blake, Holly would still not want to be with Michael.
Then Blake and Erica went on their date. Erica looked fabulous, and I was loving the tiara. If you honestly do not think Erica is the most comical human being ever, I do not know what to say. She is hysterical, and I love that she does not care. It was apparent, Erica was trying to get with him, because of strategy. If she could make the house believe Blake was into her, then they wouldn't be as likely to go home. 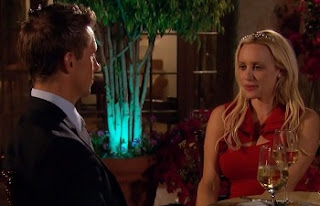 Blake is not aware of how to play the game. If he would have stayed with Erica, Michael would have been happier. He should have calculated what would be worse making Holly mad or Michael? Definitely Michael! I wholly believe Erica was not actually into Blake, come on she is Erica rose. Her making Blake squirm was hysterical, and he fully deserved it. On their date they were presented with two roses, to give to another couple.
They had a deliberation process, and concluded Kasey and Vienna should receive the roses. Unfortunately, Michelle and Graham were not following along, and Kasey and Vienna changed their minds. Honestly they should have kept Erica and Blake safe, that was ridiculous. Holly was going to be the deciding vote, and to sustain a cordial partnership with Michael, she sent Blake home.
Last night was all about betrayal. I respect Graham immensely for telling Blake he was sending him home. I am extremely saddened that Erica Rose is leaving the show. Monday nights will never be the same.
Exceptional moments of last night:
1. The cast being shocked when a helicopter arrived. My boyfriend made an excellent point, there are helicopters six times a season. It would be more shocking not to ride on a helicopter.
2. Erica saying "This is a mansion, not a trailer park."
3. Ella's fashion forward elimination ceremony dress. I loved it, and she looked absolutely stunning!
4. Michelle and Graham being precious.
5. Erica attempting to seduce Blake, and being absolutely hilarious. I love that girl!
6. When Erica told Blake her reputation was fine. She kissed a guy who was the single Bachelor. He hooked up with a girl who was crazy and kissed a girl with a boyfriend. Ouch, but so true!
I want Erica to get her own show. She kept a clear mind among the nonsense. Her point of view would be perfect for TV. Ask Erica, or Erica Rose and Company. This should also be on during the downtime of the Bachelor, to prevent the Bachelor obsessed from having withdraws.
I would have thrown Kasey and Vienna under the bus, for going against their word. It is apparent, this show is only going to get more dramatic, if that is even possible. I cannot wait for the finale. What did you think of last night's episode?
Who do you want to win?
Photo rights belong to ABC.
Love,
Bachelor Expert
Posted by Bachelor Expert Ash at 10:21 AM