What does a book review have to do with "The Bachelor?" T.A. Foster combined her love for writing and reality TV in her new book, "London Falling." T.A. Foster is a Southern girl whose heart and spirit are connected to the beach. She grew up catching rays and chasing waves along the North Carolina Outer Banks and now resides in the state with her adventurous pilot husband, two children and two canine kiddos.

Her long love affair with books started at an early age, and as soon as she was able, she transformed imaginative stories into words on paper. Time Spell is T.A.’s debut novel, and the first in a series about a very adventurous, clever, and magical girl named Ivy. 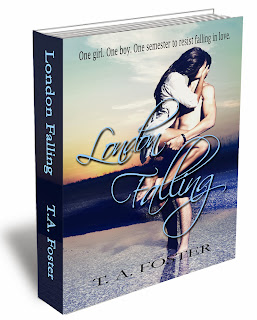 I could not put the book down and read it in less than two days. I had the chance to ask T.A. some questions and I included those below.

1. How did you come up with the idea for the book?

It really was a combination of ideas that all came together at the right time. I have been a Bachelor fan for years and wanted to find a way to incorporate the show into a book somehow. There was a news story over the summer about two friends who tried to date to see if they could fall in love. They ended up just staying friends, but I thought the idea was interesting. I combined that concept with my love of The Bachelor and my focus on new adult writing and voila!

3. Was there a season you favored when it came to research?

I really used all seasons of both The Bachelor and The Bachelorette to draw on the date highlights for Love Match. There are certainly more references to the past few years and not so much from the archives. I couldn’t make some of these dates up—a floating hot tub?

4. Out of all of the contestants who do you think represent London and Beau the best? Or which couple?

I think Ashley Hebert Rosenbaum is a lot like London. On her season she stayed very positive, open, and sweet, but was always driven and determined to keep her own goals in sight. I liked that combination in her personality.
Drew Kenney has a lot of the same qualities as Beau. He’s maybe the most photogenic person on the planet, he’s family-oriented, enjoys sports, very athletic, romantic, and keeps a few surprises in his back pocket (reference throwing Des against the alley wall).

5. Was there any significance of California in the book? Carolina is included since you went there?

California is symbolic of multiple ideas in the book: London’s dreams, the home base for Love Match, and the basic antithesis of North Carolina.
UNC is personally significant to me since I graduated from there. I didn’t want to create a fictitious school or try to write about a college I didn’t know. My hope is that it gave the book an authentic feel within all the reality TV satire.

6. If "London Falling" was made into a movie which contestants would you want to be in the cast and/or celebrities?

If it ever becomes a movie, I think it is a must that some contestants make an appearance. I would love to see some of the Bachelorette guys be London’s brothers. Zak Waddell would be a perfect Austin James and Ben Scott could play Nash James. Juan Pablo would have to make an appearance as Professor Garcia’s spring break fling. That part was written with him in mind.
Ashlee Spivey could easily play Nina, the devoted and fun best friend. Who better to be the campus playwright/director than Wes Hayden? To complete the friend circle, I’d cast Ashlee Frazier as Candace and Ryan Bowers as Pearce.
Chris Harrison has to be in it—that’s without question.
Steven R McQueen, the actor who plays Jeremy Gilbert on The Vampire Diaries, is Beau Anderson to me. He’s the perfect age, build and combination of sweet, sexy, and hot.
Casting London is a little trickier. Someone like Ariana Grande, the singer, or Danielle Campbell, from The Originals would be great. London is sweet and innocent but has a hidden fierceness when it comes to her dreams.

7. Do you feel that contestants fall in love on the show similar to the book? If not, who has and who hasn't?

In some ways I do think the contestants fall in love similarly to the book. It’s fairly common knowledge that the contestants spend a majority of their time with each other and only have a fraction of time with the bachelor/ette. So when they do get to see him/her, the experience is intensified because the time together is fleeting. Add to that candles, alcohol, exotic locations, brand-new experiences, and competition and their feelings accelerate. The bachelor/ettes that are born each season from the top tier of the rose-less, prove this over and over again. They’ve seen the dates, watched their friends fall in love, and they probably did too. They know it happens so they sign up for their own amazing journey.

8. What makes a great Bachelor or Bachelorette in your opinion?

Some of the best seasons have been when the Bachelor/ette is truly adventurous. The more daring they are, the more interesting the dates and revelations about the person on the date become. In the end, what’s important is that whoever is handing out the roses is compassionate, honest about what matters in their life, has a sense of humor about the experience, and of course…is there for the right reasons.

9. Do you feel a manufactured situation created gives opportunity to be in love for those that might not have had access to each other or creates it?

It definitely gives an opportunity for people to be in love who may have never considered each other. Even though I do believe in insta-love, I also believe that the majority of romances grow love over time. These manufactured situations put people together who maybe didn’t click at first and in the real world would have moved in different directions, but because of the show they find themselves ice fishing with champagne and discovering someone really special. Sean and Catherine are the perfect example. He has said numerous times she wasn’t even on his radar for the first few dates. Now they are only a few weeks away from their wedding thanks to an igloo date neither one was expecting to enjoy so much.

10. Do you think there will be sequel to "London Falling" or did it end in the place you wanted?

I can’t say London Falling is the final rose. I do have two spinoffs I’m plotting that are Love Match related. As for now, I don’t have a London Falling sequel planned, but my mind is always churning with storylines.

I love "London Falling" and you have the chance to win your own signed copy. Tweet me @BachelorExpert or comment below your favorite season and why?

Posted by Bachelor Expert Ash at 6:00 AM